Skip to content
Now that we know what makes classical music so valuable, it is time to examine the other elements that can make or break a concert event. Fortunately for us, Cincinnati Enquirer music critic Janelle Gelfand has taken the time to create a contribution that does exactly that. What’s more, her contribution presents solid evidence pointing to the long term value of Take A Friend To Orchestra (TAFTO) and its impact on not only audience development but retention. ~ Drew McManus

Rebecca Winzenried’s well-written article, “Into Thin Air,” in the January/February issue of “Symphony” was a discussion about a groundbreaking study called the Audience Growth Initiative. It caught my eye, not because its results were at all revolutionary, but because they were so predictable.

Anyone with a pulse on modern society knows that, while getting people in the door of a symphony concert hall is half the battle, once they are there, people expect certain things: Convenient parking, plenty of restrooms, easy-to-purchase refreshments at intermission, comfortable seats and, in cities such as Cincinnati, where the hall is in a touchy neighborhood, a feeling of safety. All of these things will keep them coming back.

But in the 18 years I have been covering the arts in our city, I have found the orchestra to be behind the rest of the entertainment industry when it comes to considering the extra-musical needs of its audience. Ironically, it owns an outdoor venue, Riverbend Music Center, where it presents a contemporary music series, which is experiencing record ticket sales. From the outset, patron amenities and continuous upgrading of the grounds (they recently added a second smaller stage) have been an important part of the “vision” that retains the ticket-buying public. That attitude has lagged behind in the orchestra’s home, and ongoing discussions to update the hall have been complicated by its ownership, the other tenants, and now, the economic slump.

Orchestras still have not fully realized their potential of being a destination, and of setting the social tone for a city. People attend the symphony for different reasons, where it is to be enlightened or entertained. I believe that they do want to feel as if they are attending an event, and many really do want to see and be seen. For those who may feel ambivalent about hearing an all-Bartok concert in their subscription series, it may be the welcoming atmosphere that keeps them interested and willing to subscribe again next season.

I’m always impressed when I visit European concert halls, as I did last April while covering the Cincinnati Symphony’s tour of 12 cities in five countries. Patrons throng the lobbies and bars, eating little sandwiches and desserts and downing beer and champagne. Some theaters, such as Frankfurt’s Alte Oper, have a café where you can order your plate before the concert and dine comfortably at intermission. Americans today are working longer hours than ever before and live farther away, often an hour or more, from the city centers, which are still home to many of America’s distinguished old concert halls. Orchestras such as the Cincinnati Symphony have tried to accommodate people coming right from work by offering a series that includes a free buffet dinner. It’s wildly popular, and I’ve seen everyone eating the free buffet from wealthy donors to federal judges. As a concertgoer once told me, “We need sustenance!” 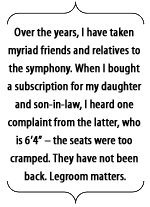 Over the years, I have taken myriad friends and relatives to the symphony. When I bought a subscription for my daughter and son-in-law, I heard one complaint from the latter, who is 6’4″ – the seats were too cramped. They have not been back. Legroom matters.

When it comes to inviting friends to the symphony, there is also the dilemma of the music education barrier. I’m not talking about teaching children in schools, although that is a dire problem for orchestras. But even high-level executives, such as my friends who oversee multi-million dollar projects at G.E. and Procter & Gamble, as well as the physicians who save lives at Cincinnati’s world-renowned medical center, have a very real fear that they are not knowledgeable enough to attend the symphony.

For many years, I annually brought my dinner club of about 35 people to the New Year’s Eve pops concert. Without fail, “Bill” would ask me later, “Well, did I enjoy the concert?” as if he could not form his own opinion. But something must have clicked, for recently I ran into Bill at a symphony concert, clutching a CD by Paavo Järvi and the CSO in one hand, chocolates in the other, and exclaiming to me, “Boy, that Paavo is really great!”

That leads me to another area where orchestras need to improve: Personal contact. When I moved to Cincinnati from San Francisco as a newlywed, one of the first calls I received was from a volunteer member of the CSO Women’s Committee, inviting us to try a subscription. How she got our name, I’ll never know. She knew we had little money, suggesting, “I can give you two great seats in the gallery.”

In those days, 35 years ago, the orchestra had a committee of 1,300 women who poured tea, organized themselves in ticket-selling precincts, conducted marketing campaigns, went door-to-door and made calls. The orchestra’s home, an immense 3,400 seats, was usually full. Of course, times have changed, more women work, and the idea of a “women’s committee” is an anachronism. But we had a name, a face and a phone number to call. It was like having your own personal shopper. Someone was looking out for you. When the orchestra moved to telemarketers in the early 90s, one important volunteer told me, “We were fired.” Attendance began its downward slide, no doubt for a number of reasons. We had those seats for 30 years.

Definitely, when it comes to inviting people to try the symphony, the personal touch matters. Recently, my husband mentioned to a young physician at Cincinnati Children’s Hospital that Sir Roger Norrington would be in town conducting an all-Mozart concert, including the Horn Concerto No. 4 with the orchestra’s principal horn, Elizabeth Freimuth, as soloist. He knew that Dr. Sharp had played the French horn as a student. Thrilled to find out about the concert, she immediately invited a friend to go with her. Dr. Sharp was impressed by the performance. Later, she e-mailed me her impressions:

“The music was wonderful. I especially enjoyed the Mozart horn concerto, since I played the French horn when I was younger.”

“I’ve attended symphony concerts at Music Hall before, so I already know my way around. The symphony website has clear directions to Music Hall, so getting there and parking was no problem. I also bought my tickets on-line and had them held at the ‘will call’ box until the concert, which was very convenient. I will definitely attend the symphony again in the future.”

Clearly, the orchestra is doing everything right – except getting the word out. Despite her Internet expertise, Dr. Sharp would never have heard about the concert had she not learned about it from a colleague at work. She told me she didn’t know about it, despite prominent advertising in the newspaper.

Ah, newspapers. In ten years, will 20- and 30-somethings even remember what they were? With the print press imploding before our very eyes, I worry about all of the arts organizations that I cover. How will they advertise their product at a time of dwindling space for arts coverage? With our own reduced staff, which has endured rounds of buyouts, layoffs and now, furloughs, we are already making choices between printing a preview story or reviewing the event – rarely both. My own time is now divided between classical music, visual art, jazz and pop, and anything else that lands on my desk. I also take my turn working the metro shift, manning the police scanner, on Saturdays. And of course, I have a blog.

The arts will need a new grassroots program, like the CSO Women’s Committee. Perhaps in the future, the new “personal touch” will mean Twitter and Facebook. Already, I see organizations using these tools, a smart idea, I think. But will that reach everyone? I do not know.

My most rewarding experience taking someone to a concert happened a few months ago. I took a special little girl to her first concert, a “Lollipop Concert,” in Music Hall. Katie, 2 ½ was enthralled, not only by the music on a “bug” theme, but also by the student ballet dancers who participated with the symphony. She stood by her chair and imitated them. So, I thought that taking her to “The Nutcracker” the next month would thrill her even more. But when the curtain rose, she loudly announced, “I can’t see the orchestra.” She wasn’t content until later, when we leaned over the pit and she could see the musicians. I think I have planted a seed in the next generation of concertgoers.